The ACDM are delighted to announce that Castor are to be the Communications & Social Media Sponsor for ACDM20. Castor will also be exhibiting and giving a demonstration hour at ACDM20 from 8-10 March 2020 at Clontarf Castle in Dublin.

Based in Amsterdam, The Netherlands and New Jersey, US, Castor is an international health-tech company founded in 2012 by CEO Derk Arts, MD, PhD to leverage the power of machine readable data to increase clinical trial efficiency. Castor’s Electronic Data Capture (EDC) platform enables every researcher worldwide to easily capture and integrate medical research data from any source in real-time, including clinicians, patients, devices, wearables, and EHR systems.

Castor is currently collaborating with 30,000 researchers, academic institutions and commercial companies across 90 countries to help them accelerate their studies. The platform has supported more than 4,000 studies that cover a broad range of disease areas including diabetes, cardiovascular disease, heart disease, rare diseases, and cancer. Researchers on the platform generate vast amounts of data from traditional and decentralized trials, and Castor recently reached milestones of 100,000,000 data points and 1,000,000 enrolled patients. As one of the first companies to leverage machine readable data for clinical research, Castor’s platform will enable AI-driven clinical trials and provide invaluable insights to commercial research.

IQVIA to be Premier & Interactive Sponsor for ACDM20
December 19, 2019 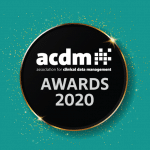